“In a dark place we find ourselves,
and a little more knowledge lights our way.”

As far as I can tell - based on both Twitter Sentiment and personal messages - the market is once again at the verge of shaking out even those with strong conviction and belief.
Although the shakeout is a natural process and part of a bigger cycle, people generally are having a hard time dealing with the negative emotions inherent in such move, yet the hardest part clearly is the confusion that comes along with it.

Usually what helps most at this stage is clarity, which in turn is most rare in phases like this — in other words: the confusion is high these days, while those uttering their opinion get flamed for doing so. News tend to be very bearish in these periods, which generally is a good sign. If you think about it, news are news. The purpose of news is to both inform (although this clearly is to debate in todayâ€™s news environment), and to raise awareness, with the latter being of paramount importance. Even negative news generates attention, which in turn triggers people to make new decisions. So either way, a significant increase in news will have a positive result on the level of attention Bitcoin and Crypto will receive. Remember the media does not work in your interest, instead they even add to the inherent confusion of the market phase. So while clarity is what we are looking for most, it is also the most rare in these circumstances.

Therefore I decided to follow up on my post “The Paramount Battle of 6k” from earlier this year, where I outlined both a bullish and bearish scenario for the remainder of the year, to at least provide some perspective on what is happening and what we might expect in the shortterm future. I want to note however that my longterm view has not changed by a degree, quite the opposite. Despite prices being significantly lower than a year ago, the fundamental outlook has increased manifold. Nowadays I am more confident than ever that we have seen nothing yet, while the journey is still in its first steps.

Yet now here we stand, facing the destructive patterns of late bear trends where majority of Hodlers decide to give up finally, while smart money silently accumulates, often under disguise of institutional investors.

The difference between those two parties usually is the timeframe/horizon they operate in. While smart money is focused on the very longterm and tend to average down, those holders selling of their positions at these prices have lost their longterm outlook in favor of a shortterm panic / emotional move (finally getting rid of the burden of holding bags in far red), to end the streak of negative emotions that naturally comes with a move down.

Anyway, I will not focus on those who are selling their positions now, or even lower. I am afraid they lack a proper understanding of how markets operate, and there is not much to help them at this stage. Instead I want to provide two scenarios for the time being, as I expect the following days and weeks to be very turbulent in both directions. Due to the nature of the market phase we are currently in, both scenarios cover bearish outlooks, while one being more, the other less bearish in nature. 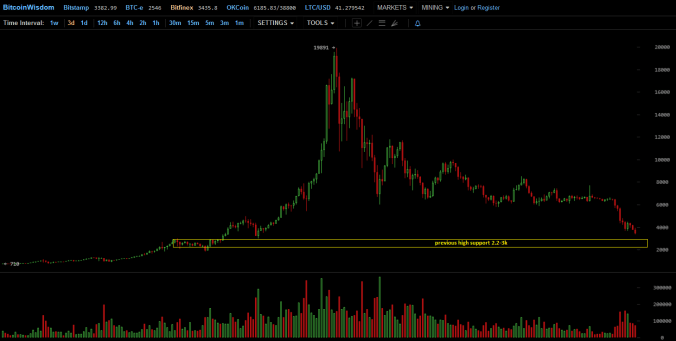 The 3000 support is widely considered to be very strong and an excellent opportunity to fill some low bids (compared to previous prices this year). It may be very likely that this bear trend will have its final capitulative wick in this area, while a touch of 2800-3000 with a potential panic wick way into the mid 2k area (due to highly leveraged trading in combination with insane volatility) is very probable. Generally I see this scenario as very likely, as 3k is definitely based on technical reasons. However the consensus among the community and technical analysis is to some degree what worries me, but doesnâ€™t stop me from acting when price action at this level should be undeniably bullish on volume. The reason why 3k might turn out to be an excellent level to enter positions is that it is the first significant high following the previous ATH level. The thought behind this rationale is that those who entered on the old ATH breakout will remain positive in their positions, as it should be. In a prolonged uptrend, late buyers should not have an advantage over early buyers. A bullish gap between 3k and the old ATH level would make a lot of sense in this regard, as early buyers will be rewarded for their earlier entry, thus maintaining positions above break even. 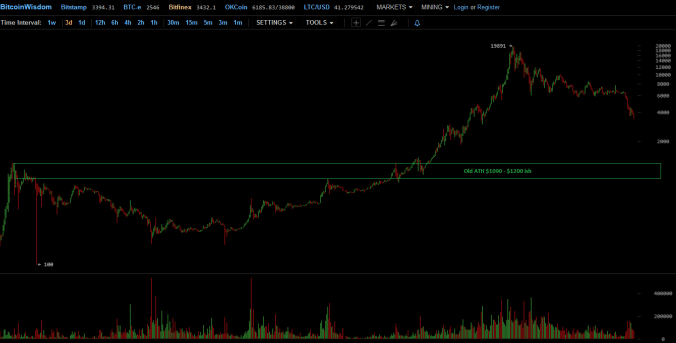 Another scenario with more bearish implications would be a clean retest of previous ATH. As outlined in previous article this level would make most sense in the story of the chart, simply as this level was the key level taken out before the bull run started. Uttering this potential level earlier this year has shocked retail investors, yet it had and still has a relatively high probability of being reached. When we look at the All Time Log Chart it becomes plainly obvious that this is the paramount level where most investors look at trying to get a supreme opportunity to enter longterm positions on such hefty bargain.

In other words: If prices reach the $1000 mark I consider this a once-in-a-lifetime opportunity to enter right into the violent capitulation of longterm believers; the point of maximum financial opportunity with as less risk as possible. Of course there will be those saying that the risk of BTC dying with a dip to or below $1000 is simply too high, I tend to differ. This would be the retest of breakout point, and I will make sure to buy as much as I can at this level. 1090, 1096, 1166, 1175 are the levels I specifically observe in this regard, although those levels may vary depending on which exchange data you use.
The mark that I remember most dominantly is 1090, so any price action at this level will very likely become a buy in my playbook. To make it simple: Any retest of 1090-1200 or below is the buy opportunity of a lifetime, and I will not hesitate should it come to this situation.

Have faith. The Crypto Journey does not end here, it is merely in the early steps of beginning. You asked for institutional money entering the game, this is what we experience now. They donâ€™t want you to participate in the biggest wealth transfer the world has seen, and they wish youâ€™d capitulate for breadcrumbs so they can accumulate more. They have more time, more money, and more skill. Donâ€™t do them the favor, stay strong and faithful in what you are trying to achieve. Everything else is just temporary noise. Do what you can with the cards you have been dealt, and stop complaining that life is tough sometimes. It is all part of the game, and the purpose is for you to learn to adjust to life circumstances in the most effective way. Learn from this what you can, and then move on. Stop complaining about your losses, think about how you can use this situation to your favor. Drop the negativity, and develop a positive outlook.

This Too Shall Pass. The Bull will return.

May the Faith be with you,