every day its a pleasure to wake up and dive into crypto, no surprise with such a great community. Today I want to elaborate on the end of BTC dominance due to various reasons. For the analysis I used all charts on blockchain.info, which is a great reference to get an overview over the overall state of the market. So lets go:

Lets start with the obvious: Blocks are full to an extend that transactions no longer will be processed except if you include a high fee. Waited for a transaction for five days, included $70 fees, because I needed it to be quick. The situation is unbearable, and prices cant maintain the current altitude without a solution. Have a look at this chart:

It becomes evident when seeing it like that, Blocks are more than full, the natural limit of the blockchain is reached. There is two options how to go on:

The decisive point is now until July 2017. If not solution is to be found, BTC price of > $1700 is not justified, given altcoins exist providing more value in this regard. IMO current price of BTC is unsustainable given the current circumstancs. But lets go over more charts: 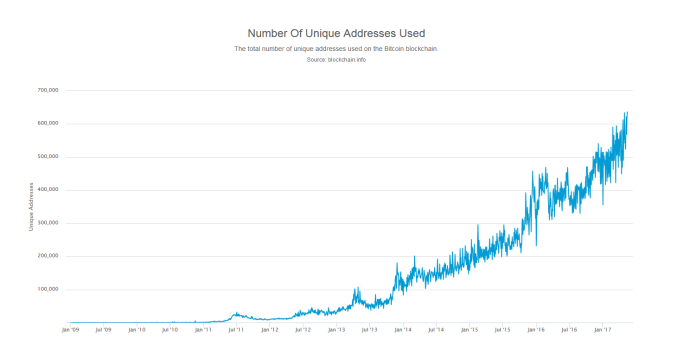 Unique addresses accelerating, will spike soonish if trend continues (crypto trend unstoppable at this stage IMO). That means we have spiking interest in crypto, for which BTC is the foundation. Rising Interest vs Blocksize Limit Situation here. 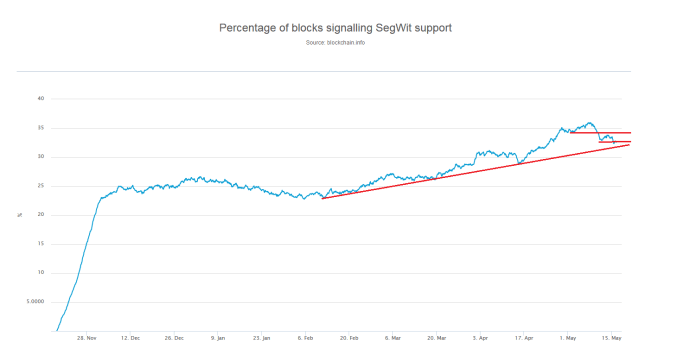 However when it come to solutions, we are not even close to anything. The chart above is just the example of Segwit support, which has a hard time keeping a level of moren than 30% support. Problems are severe right now, but solution is not in sight.

Mining however are doing great! Sure they do, after all who profits from rising fees in transactions… So for miners the current situation is very profitable. Rising Interest, but limit slots per block for transactions, thus the TX with the highest fee will be accepted only. Such profits. But is the fee rising actually? 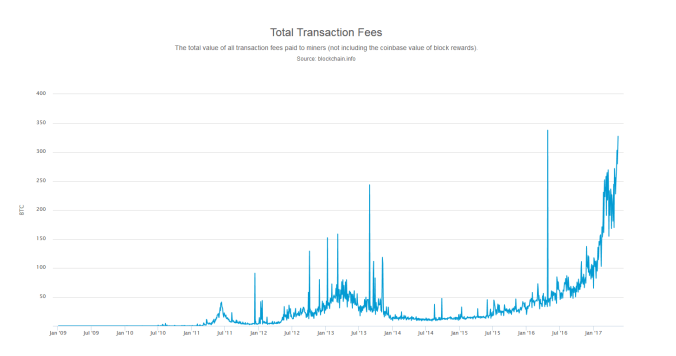 Oh, but yes! BTC fee are spiking, on the way to a new All Time High. which in this case is not a buy, but a strong sell. Network remains with many limitations, getting slower every day, but costs for TX increase at the same time. However this chart is nothing compared to the next, as BTC prices may be confusing. This will be pretty clear: 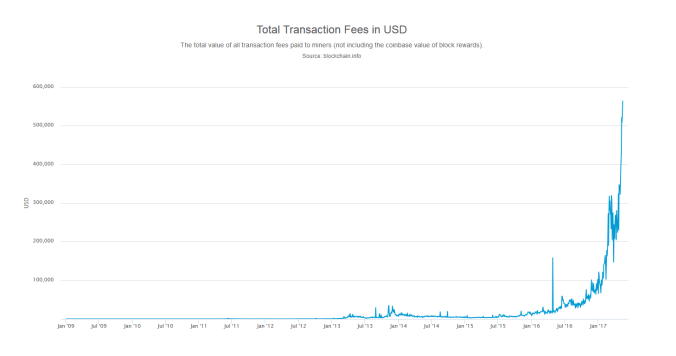 Oops. fees in USD way above ATH, accelerating, spiking, going parabolic. Looking at these charts, everybody is able to tell that BTC has a big big problem coming up soon. 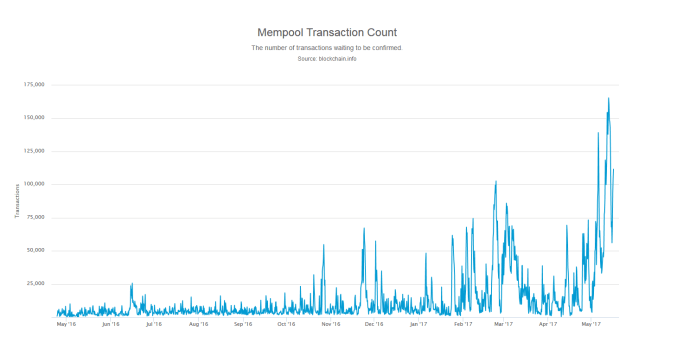 Mempool increasing every day, having more unconfirmed transactions in the pool than any time before. That means transactions are stacking up in the blockchain, but get not processed as highest fee TX will be included in blocks. Thus transactions with small fee may take weeks to arrive at the destination. But lets have a look at the total market cap:

Total market cap spiking, showing no signs of reversal. High volume on this upmove, thus likely more to follow. Money is flowing into crypto at an unseen rate, and is likely to increase in the next weeks, months and years. Unstoppable at this point.

BTC percentage in the overall market cap is decreasing rapidly, money flowing into alts at insane rate. If there is no quick solution, other coins will take over BTC’s leading position. All alts will have a golden time. Thus this still is the beginning in terms of #GoldenAge, as the BTC crash is needed for Alts to completely leave current range. Its like 2011 all over again.

Total Market Cap excluding BTC is spiking, further stating the obvious: The Altmarket is unstoppable at this time, massive money flowing in. Every day now, BTC loses its dominance, while Alts take more control. This will accelerate without a quick solution.

Lets have a closer look at the most dominant Altcoins, namely ETH, XRP, LTC, DASH, as the MKTCAP charts have been provided by coinmarketcap.com. thanks for that.

Well, not much to be said about XRP. Everyone who read my articles and followed me closely the last five weeks is balls deep in XRP for a move beyond $1. Massive money is flowing into XRP, and will likely accelerate. As I tweeted earlier; If Banks START using Ripple this year, this is the beginning, not the end of the rally. hodl for life here, your future self will thank you.

After XRP and STR had some massive rally and shows signs of corretions, ETH is probably very willing and able to do the same. Expecting a retest of previous MKTCAP Highs, where it will likely reverse and spike beyond ATH. From the looks of the chart, there might be some more days of consolidation, but buyers should increasingly find their way into ETH soonish, which will lead to profit taking in XRP and flows into ETH/ETC and coins based on Ethereum code.

Comparing both we clearly see XRP taking over control, however ETH will not give its rank up without a proper fight. I except a honest race between those two, XRP now taking the lead. When it will correct, ETH will spike to keep up. So positioning early in ETH pairs is a wise move.

LTC is still early in this regard. Had a breakout of the channel on high volume, but currently retesting, also waiting for XRP finishing its move. Entries are triggered, expecting Higher Highs, Higher Lows in the future as well as acceleration. Retest of previous support is expected, thus some more days patience until the small brother will lift off, with a erious attempt to take over control the majority of BTCs marketcap. After all, Segwit got activated, LN. In short. LTC is BTC in 2011. Please have a look at the All Time Chart BTC again to get a picture where we currently are in the LTC narrative.

DASH also very early. had a spike above ATH, now correcting and retesting previous buy support levels. Does not matter by the way if the chart I analyse is MarketCap or Price/BTC. Eventually all charts work the same way, even in Nature. Laws of chart are fundamentally included in this life experience. Chart anything you like, try to apply TA, watch magic unfold. How does it work? I dont know, but it works. Experiment with it!

So lets come to a conclusion:

Transaction Value is spiking, Unique addresses spiking, MKTCAP spiking. At the same time, number of Unconfirmed Transactions spiking, Cost per Transaction spiking, but no solution in sight. The era of BTC is coming to an end. Position into alts before its too late. Once the crash comes it will be devastating, and Alts will be the winner. Buy all promising projects early in anticipation, also SmallCaps which will may generate 1000x+ ROI if bought very low, hold very long. Make the best out of this opportunity, always be one step ahead. Hold your bags, survive all the dips, even if its going down 40 or 50% on a day. It will come back. Please dont be tempted to sell the tops and rebuy lower, only if you REALLY know what you do. If you trade less than a year i crypto, just hold your stuff.

Normally last Highs will be retested after a pump, thats TA law. Thus traders try to sell the top when its far away from breakout point, and try to rebuy lower at last High. Until that very day, when the buy support is so strong that the last High will not even remotely be tested, and leaves a big gap in the chart, which is a signs of bullish strength. All will need to buy back in panic way higher than they originally sold. This will lead to two things:

1) a MASSIVE fomo leg up, leaving behind all previous Highs for never to return.
2) Traders who got trapped in this trade and rebought higher will likely hold from now on. Which means that they will no longer sell the tops, which is decreases resistance and will lead to Higher Prices in the future, more quickly, more easily, more accelerating.

If you still sell the tops and it works, fine. Please dont be left behind. If you start holding now, expontential profits will await you this year. If you continue, I give you a 90% chance you will be left behind at some stage of the rally, missing 90% of the entire move.
Gentlemen, please place your bets.

Good luck riding this wave, for the #GoldenAge is near, and will finally kickoff when BTC starts to collapse. Be prepared in advance. Support your fellow traders to dont panic sell the dip, stay strong, give each other support and help, stay disciplined. And I do not worry about your financial future in 2-3 years from now, for life.

All the best, kindest greetings to people all over the world who were at the right time, at the right place, doing the right thing. Its wonderful to have you all here and I love every day spending with you folks, witnessing history of the biggest bubble of mankind.

Much success, and stay tuned,

“A Letter from Dagobah is never late,
nor is it early, it arrives precisely
when it means to.”